I’m a big fan of Studio Ghibli films, and an even bigger fan of Miyazaki’s works. However, I couldn’t seem to find time to watch this movie, even with it coming out in 2017. However, I’m now able to watch it.

“Mary And The Witch’s Flower” is a 2017 film released by Studio Ponoc based on the 1971 novel The Little Broomstick, much like many other films in Ghibli’s library. Going into this movie, I expected nothing but quality from the people who worked in the same studio of films such as “Spirited Away” and “Princess Momonoke.” And it’s safe to say that I got it, with beautiful animation, a great English dub, and worthwhile characters.

Ghibli movies usually have a plethora of characters for you to focus on, but never enough to overwhelm you. This movie is no exception, mainly because the major cast is limited to about six characters.

Mary is very well rounded as a main protagonist, which is good for former members of a studio that has a good track record for female protagonists. She feels human enough to seem like she could actually exist, and has her own goals in life.

That being said, she isn’t the only character we focus on. Peter is another protagonist, and he reminds me of Sheeta from “Castle In The Sky,” another Ghibli movie. But in a way, he’s the antithesis of her, in that instead of being extremely shy and not fighting much, he fights back even when captured.

And the minor characters do their part as well. Each one of them gives that charm you really don’t see elsewhere.

The animation in Ghibli films is at the very least gorgeous, and this movie is too. At no point does the animation drop in quality, and it makes already good character designs work even better.

That being said, most of the film is either in the “real” world or the “magic” world. In the real world, everything is grounded in reality, but not enough to make it dull. In fact, the real world’s looks perfectly compliment the more grounded character designs, where everything is…well, normal!

The magic world is where this movie earns it’s 10 point rating, though. They did not skip on any of the details, and it shows. Character designs are more dynamic, the colors are vibrant, and there are so many background details.

Not only does this movie have stellar animation, but it is also well written. For a studio’s first film, this movie has a surprisingly good script. Sure, it has its flaws (below), but it doesn’t make the audience think the story is bad, and it certainly doesn’t warrant a lower score.

Not only that, but each of the characters is an individual. A character Doctor Dee constantly spouts scientific terms, while Mary herself is written to be a generally nice person, but with the occasional teasing here and there. 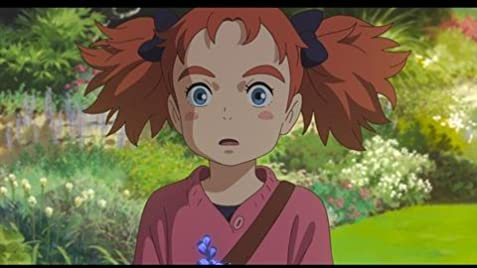 As good as this movie is, it isn’t without flaws. One thing to note is that the plot, at least for me, is very easy to figure out. I can understand that this is the studio’s first movie, but the story had a lot of cliches I figured out. I even thought that the cats in the first parts of the movie were completely separate characters when I saw one “change” color, and low and behold, it turns out they were.

…Okay, I will admit, that is a nitpick.

As a first movie, this film does just fine. The characters are good, the writing is good, and the flaws don’t detract from the enjoyment enough to make it unwatchable.