The mission of the Glen Ellyn Public Library is to serve the community as a vibrant center for accurate information, robust learning, and personal discovery.

We believe that a community flourishes when it sees itself reflected in its library and uses the library as a window for discovery.

We exist to provide an open, vibrant center that builds community where all people can connect, explore new trends, and find trustworthy, reliable information to feed their curiosity.

We demonstrate it by offering dynamic, modern spaces, a broad range of resources and timely events, trusted and welcoming staff, and a commitment to the wellbeing of our community.

Glen Ellyn Public Library serves a community of almost 29,000 people and is located about 20 miles west of Chicago. Currently, the library holds 137,500 items, including books in print and Braille, audiobooks, DVDs, magazines, newspapers, playaways, STEAM kits, American Girl dolls, video games, and playpacks. Cardholders also have access to over 1,203,530 eBook, eVideo, eMusic, eAudiobook, and eMagazine items from streaming services like Hoopla, Freegal, OverDrive, Kanopy, and Axis 360. Through our consortium, cardholders have access to almost 2,229,000 items. Glen Ellyn Public Library also subscribes to over four dozen digital resources and has events and services for all ages.

The first glimmerings of a public collection of reading materials for the community began in 1881 with the sale of 100 books by an agent of Harper Brothers Publishing Company to twenty citizens of Danby (one of several early names, along with Prospect Park, given to the area) for $100. The first known home for these materials was on the basement shelves of the First Congregational Church, where they were tended to by The Library Association of Prospect Park.

Thanks to a group of determined, civic-spirited women, who established the Glen Ellyn Study Club (forerunner of the current Glen Ellyn Woman’s Club), interest in a subscription library was sparked in the spring of 1907. These women, including Mrs. Charles B. Hopper and Mrs. C.W. Somerville, formed the Glen Ellyn Library Association, raising funds for their effort through teas and other social events. In May 1907, the library association opened a reading room in the village hall, which was housed above the fire station on Pennsylvania Avenue. Its collection included the original 100 books purchased in 1881, plus 40 new books. In just a few months the library’s collection increased to close to 1,000 volumes and had to relocate to two rooms above the Boyd Bros. Hardware Store on Southwest Main Street. 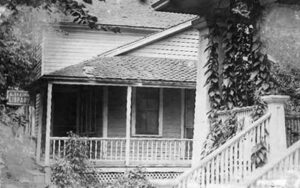 As the Village of Glen Ellyn continued to grow, so, too, did the volume of books at the library. The volume of books soon outgrew its current location, and, in 1911, the library moved again. The Glen Ellyn Library Association purchased an old residence just east of the post office on Pennsylvania Avenue, once owned by the Nickerson family. The entire collection of nearly 2,000 books was moved by school children in their wagons. The Nickerson house would prove to be a temporary dwelling for the library, as the Library Association had been doing some long range planning involving wealthy industrialist Andrew Carnegie.

After negotiations with the Carnegie Foundation, which promised funding for a new building in return for a guaranteed local community tax to fund library operations, the Library Association negotiated a land trade with the William Grimshaw family. They received a vacant parcel of land in exchange for the Nickerson House property on Pennsylvania Avenue. It was at this time that a two mill levy was passed for the operation of the library and the first library board of trustees was elected: Mrs. Charles B. Hopper, President, Mrs. C.W. Smith, Miss Kate Treat, James Furman, E.W. Wagner and Arthur Gamon. 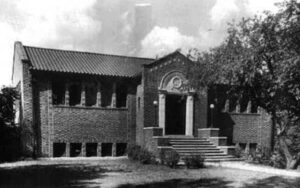 With the help of the $10,000 Carnegie Grant, the first true public library for Glen Ellyn was built on the northeast corner of Park and Crescent. The new building opened in the fall of 1914 with accommodations for 5,000 books. Growth of the collection was slow during the years of the First World War but, by 1925, the collection had grown to over 6,500 books and materials. The capacity of the structure was quickly overwhelmed by the demands of the community. Successive modifications were made to the original building in 1925 and again in 1933. 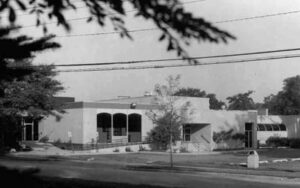 As the Village of Glen Ellyn expanded after World War II, so too did the library collection — hitting the 25,000 mark. Borrowers were implored to carry home armfuls of books to relieve the storage crises. In April 1961, a 20-year bond referendum for $184,000 was approved for a major addition, which significantly increased shelf space to 50,000 volumes. The project also changed the appearance of the building to a more contemporary look. The main floor was converted into the Jean Leslie Stephens Reference Room through an unrestricted gift of a local resident as a living memorial to his wife. In 1978, the library won approval of a $1,000,000 bond issue to once again enlarge the facility, this time doubling its available space.

In less than twenty years it was clear the eighty year old library at Park and Crescent could expand no more. In 1994, a referendum for a $5,000,000 bond issue was passed, allowing for the construction of a 52,000 square feet structure, nearly double the size of the old library. The current building at Duane and Prospect, which opened in late 1995, was designed to hold 175,000 volumes. Fiber optic cabling was installed to take advantage of future developments in data transmission. Most of the layout of the library, built in 1995, has remained unchanged, with the first floor housing the public meeting rooms, Circulation and Youth Departments.

A special feature of the Circulation area at the time of 1995 construction was a convenient 24-hour book return box, which empties into a large room that houses a conveyor machine. Unique features of the Youth Department included the child-sized restroom, the display cases, and the computer room. Distinctively designed with its 26 feet high vaulted ceiling, the second floor continues to house all of the Adult Department collections and Young Adult collections.

Since the construction of the library building in the mid-1990s, the library has experienced many upgrades to the computers and electronic devices offered to its members as well as the equipment used to process books and other materials, including the self-scan check out machines, introduced in 2007. The emergence of electronic books and other online resources created an entirely new delivery system for library materials and services.

To better serve the interests and needs of library members, in 2014, the library renovated the second floor, giving adult members a space to meet, create, collaborate, and learn. Additional study rooms, a lounge, and a Digital Media Lab were created. New furniture, including tables with power outlets and comfortable seating, carpet, and lighting fixtures were also added. 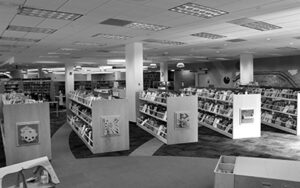 In 2015, the library remodeled the Youth Department, creating a flexible, accessible, and user-friendly space for kids and parents. The new space is an interactive and imaginative area in which children can learn and play.

The final phase of the interior remodel began in January of 2018.

If not indicated otherwise, photos from Glen Ellyn Public Library: The First Century 1907-2007.

The Glen Ellyn Public Library is grateful for its place in the Village of Glen Ellyn and the land we are able to inhabit. We acknowledge the peoples who were here long before the village was formed: the Ojibwe, Odawa, and Potawatomi who are also known as the Council of Three Fires. Others such as the Očhéthi Šakówiŋ, Kickapoo, Peoria, Miami, Sauk, Fox, and Illinois also settled on and moved through this land. The people of these tribes cared for this land as stewards of the rivers, the wildlife, and the plants, which flourished. They inhabited villages in the area, including those in what are now Churchill Woods and The Morton Arboretum.

As an organization whose mission is to serve the community as a vibrant center for accurate information, robust learning, and personal discovery the Glen Ellyn Public Library wants to ensure that we tell with integrity, the history of the land that we now inhabit. We are committed to offering materials (books, dvds, etc.) and programming that accurately reflects the history and the present day lives of the Indigenous community. We will use our physical and digital spaces to share first voice information. We will offer programming in partnership with indigenous cultures who were here before and are here today. We will offer the space for all to tell their stories and we will listen.

This statement is made in good faith and we recognize that it may need to be adapted to more accurately reflect the lived experiences of the indigenous peoples in this area. This statement is fluid and will change as needed.

The Glen Ellyn Public Library thanks Gina Roxas of Trickster Cultural Center, who shared her time and knowledge to help craft this statement.

Trickster Cultural Center
History of Churchill Woods
The Morton Arboretum Land Acknowledgement
What are land acknowledgements and why do they matter?

Offer a broad range of resources and timely events.